Benjamin Franklin boasted attending church five times in a row.  His opinion of the minister was that his sermons were “dry, uninteresting, and unedifying, since not a single moral principle was inculcated or enforc’d…”  Being disgusted, he composed “a little Liturgy, or form of prayer, for my own private use.” This made up his private religious practice. (Autobiography of Benjamin Franklin,  pp. 70-71)

The minister of his Presbyterian church admonished him to attend the services being the only minister of that sect in the area. Probably the minister was trained in religious instruction and felt authorized to administer the various sacraments.

I share both of these scenarios as examples of unauthorized religion in America.  The first, Ben Franklin, created his own religion for his own use.  The second, the minister, administered the sacraments without finding out first if God would honor those sacraments. 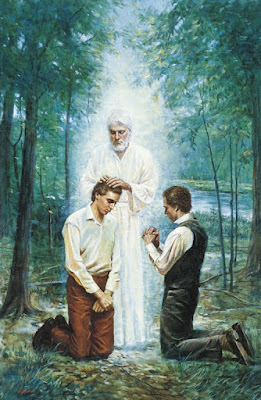 The Lord has said, “And if they be literal descendants of Aaron they have a legal right to the bishopric, if they are the firstborn among the sons of Aaron; For the firstborn holds the right of the presidency over this priesthood, and the keys or authority of the same.” (D&C 68:16-17)

Of course it is doubtful that an American colonial minister was also a literal descendant of Aaron. The authority to officiate in the church comes from someone who has the authority. When Joseph Smith was commanded to organize the Church of Jesus Christ of Latter-day Saints, he asked God a question about the authority to baptize.  In answer to his prayer, John the Baptist, a resurrected being came down from heaven and gave to him and his scribe Oliver Cowdery the Aaronic Priesthood which is the authority to baptize.  That authority has been handed down to the present day. Explore more on this topic here.

Notably, the authority to act as a spokesman for the Lord on Earth with the title of Prophet, has been a guiding force in the Church of Jesus Christ of Latter-day Saints.  This post is about the prophets from Joseph Smith to the present.

“A prophet is one who has been called and raised up by the Lord to further God’s purposes among his children. He is one who has received the priesthood and speaks with authority. Prophets are teachers and defenders of the gospel. They bear witness of the divinity of the Lord Jesus Christ. Prophets have foretold future happenings, but this is not the most important of their responsibilities, although it may be some evidence of prophetic power.” Source

All prophet testify of Jesus Christ. Starting with Joseph Smith, “God has spoken anew and continues to provide guidance for all his children through a living prophet today.” ibid

So how have prophets guided the Saints and what has been revealed to be the will of the Lord?

Joseph Smith (1805-1844):  was a visionary who both restored ancient practices and organized the Saints into a Church.  He saw the Zion of the last days and the building of temples.  He built two temples under the direction of God the Father. One of his great works was to translate an ancient record into English that retold the stories of prophets and the coming of Christ to a civilization in the American continent.  This civilization is long gone but their words were preserved to prepare and guide believers back to the truth in a world of so many choices and voices.

Brigham Young (1801-1877):  He was a visionary who saw the Saints new home in the Western territories of North America and directed them to begin colonizing the land.  Instead of allowing the saints to all bunch together for survival at first, he immediately sent them out to distant places in the West to begin settlements.  He began the construction of three temples.

John Taylor (1808-1887): He was a scholar and spokesperson for the Church as it faced opposition in other parts of the United States. He helped translate the Book of Mormon into French and oversaw the expansion of religious settlements in Wyoming, Colorado, Arizona, Canada and Mexico. Source

Wilford Woodruff (1807-1898): He was the prophet who decided to formally end the practice of plural marriage with a document called the Manifesto. He kept extensive journals which give a first-hand account of life on the frontier and the dealings of the early church.

Lorenzo Snow (1814-1901): He was the prophet to bring financial stability to the church by emphasizing the payment of tithes. His efforts were to bring the church stability just 30 years before the Great Depression. He envisioned the world-wide expansion of the church which took many years to become a reality.

Joseph F Smith (1838-1918): He encouraged the Saints to stay in their homelands where previous converts had all emigrated from their homes to the United States. In response to public interest in the theories of evolution, he issued a statement affirming that men are created in God’s image. He had a vision of the the nature of the “Spirit world” where the dead reside which can be read here. He envisioned future Church programs such as Family Home Evening, seminaries and the use of priesthood counsels in local government which were implemented fifty years later.

Heber J Grant (1856-1945): As members of the Church grew, he organized the first stakes outside the Western territories in California and New York. To communicate with these Saints he used phone networks and radio broadcasts.  Following the Crash of 1929 and the Great Depression, he organized the Church’s Welfare Program.

George A Smith (1870-1951): As the prophet who saw the end of World War II, he expanded missionary work. He reconciled with disaffected Saints in the Mormon colonies in Mexico.  He was an avid genealogist.

David O McKay (1873-1970): He was the prophet who formed the first stakes outside the United States.  He broadcasted the General Conference of the church worldwide.  He sent the first home teachers to individual member families to teach the gospel and assess needs.  He introduced Sunday School manuals and the Family Home Evening program to the Saints.

Joseph Fielding Smith (1876-1972): He announced the Youth programs of the Church and coordinated the participation of Church youth in the Boy Scouts of America program.  He began a training program for Bishops, (lay leaders of the Church).

Harold B Lee (1899-1973): A prophet for only one and a half years, Lee did much to support earlier prophets in their inspired leadership.  He was a dynamic speaker and defender of the faith.

Spencer W Kimball (1895-1985): His great contribution to the spirituality of the Saints was the annotated King James Translation of the Bible with footnotes, dictionary and appendix.  He also standardized the additional texts of the Church into a bound book of three texts with footnotes and appendix.  These tools helped the Saints study the gospel on their own and increase in faith. He condensed the worship services scattered throughout the week to one three-hour block on Sundays. He opened the work of spreading the gospel in Africa with his “Revelation on the Priesthood” allowing all worthy males to receive priesthood authority from someone who has been duly ordained.

Ezra T Benson (1899-1994): He reemphasized the study and use of the Book of Mormon and dedicated nine new temples. He was an advocate for freedom and the US Constitution.

Howard W Hunter (1907-1995) Another prophet to only serve for nine months, he helped to draft the Proclamation on the Family which was released the year after his death and he encouraged the Saints to worship more often in the temple closest to them.

Gordon B Hinckley (1910-2008) A energetic prophet who envisioned the construction of “Little Temples” after visiting Saints in Northern Mexico who could not travel across the US Border to Arizona to worship in the closest temple. He constructed a new Conference Center.  He added six quorums to the seventy who administer the world-wide church.  He also introduced the Perpetual Education Fund which helps Saints in foreign countries receive a micro loan  to get a higher education. He increased the standards of worthiness for missionaries to serve.

Thomas S Monson (1927-present) He has been known as the Rescuer who sent more local saints out to find apostate members and also increased the number of missionaries serving by lowering the age at which they could serve.  His most recent address to the Saints can be read here.

Thanks to Wikipedia for providing the dates when these men were born and died.
Posted by MommaM at 4/11/2016 No comments: Links to this post